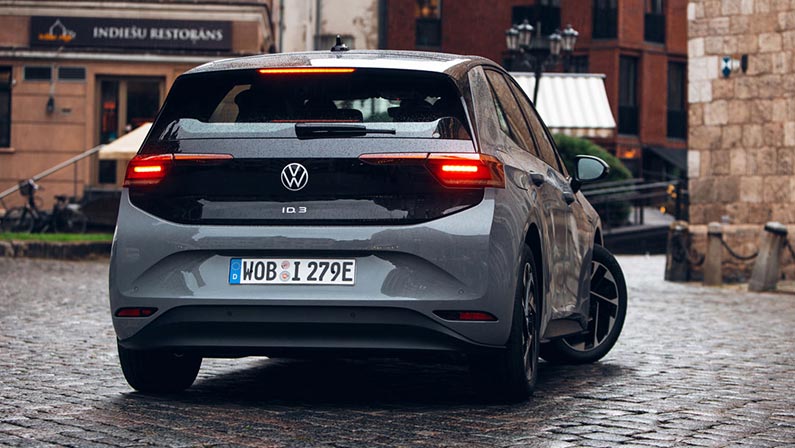 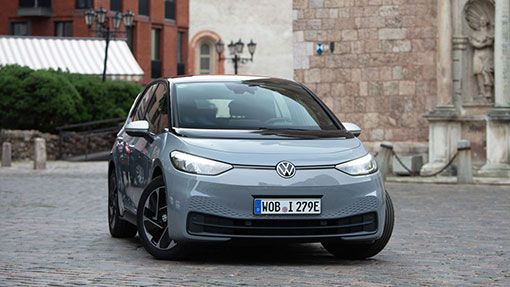 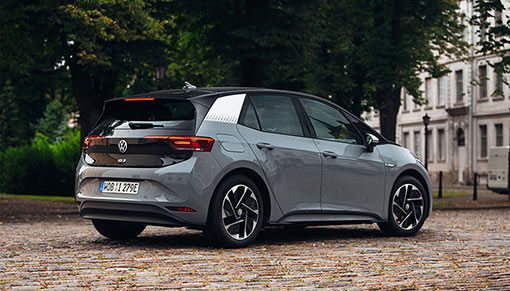 There’s no clue this cool-looking, rather futuristic vehicle is a Volkswagen. It’s clear from even an initial glance that the ID.3 has nothing in common with your father’s Volkswagen.

Volkswagen is shedding its past and veering into the future. In an announcement in late October 2019, Volkswagen revealed it has plans to build 22 million electric vehicles over the next eight years. And nearly half of those EVs will be manufactured in China. By 2022, the company expects to have eight facilities around the world that are producing battery-powered vehicles.

Volkswagen’s October announcement also includes news regarding the popular Golf, which ranks third among best-selling models of all-time, trailing the Toyota Corolla and Ford F-Series. For 2020, VW is replacing the e-Golf with the ID.3, a five-door hatchback.

The ID name stands for intelligent design. Volkswagen is following up with several other ID concept cars, including the ID.4, ID Crozz and ID Vizzion, The ID.3 is Volkswagen’s initial EV car on its new MEB platform, the underpin for all its future EVs that feature the ID badge. The ID.4 plant will be located in Chattanooga, Tenn.

At least initially, the ID.3 won’t be offered in U.S. markets. However, there are reports that Volkswagen will unveil the ID.4 in North America around spring of 2020. The ID.4 is a crossover sport utility vehicle that is slightly larger than the ID.3.

The ID.3 is the first all-electric production car that utilizes Volkswagen’s new Modular Electrification (MEB) system. Under the MEB platform, VW says it plans to produce an ambitious 10 million EVs over the next 10 years.

In fact, the 2020 Volkswagen ID.3 has little in common with most vehicles. In a huge nod to electric vehicles (EVs), the Volkswagen team creatively manufactured the ID.3, and did the inaugural unwrapping at the Frankfurt auto show in September 2019. The ID.3 has a black tailgate, closed-off grille, large front window, and matrix LED headlamps.

Inside, the ID.3 is very techie, along the lines of a BMW i3 or Tesla Model 3. The 10-inch infotainment digital central screen is within arm’s reach and has touch-sensitive control. There’s also a digital gauge-cluster screen, located atop the steering column. The touchscreen operates everything but the windows and hazard warning lights. Larger than the Golf, the ID.3 offers solid interior space.

A little longer and wider than the Volkswagen Golf, the ID.3 will have not one, but three different battery sizes (45 kWh, 58 kWh, 77 kWh) with a mileage range between 205 to 341 miles before recharging is needed. Breaking it down, the 45-kWh battery will offer about 205 miles of range, the 58-kWh battery goes approximately 260 miles, and the large 77-kWh battery around 340 miles.

The rear-wheel drive ID.3 has one electric motor. The body is almost entirely steel, so for a rather small vehicle it’s heavy, weighing around 3,800 pounds. The 58-kWh motor generates 201 horsepower and 228 pound-feet of torque. Volkswagen isn’t revealing the 0-60 mph clocking, but says the ID.3 has a top speed of 99 mph. The ID.3’s 45 kWh battery has 150 horsepower and the 77 kWh battery has 250 hp.

Thanks to its rear-wheel-drive, the ID.3 provides a very sporty ride and delivers terrific traction on challenging tight turns. It has good initial speed and its performance will be a real plus in freeway passing situations. Slowing down the car involves regenerative braking – a mere lift off the accelerator and the car is in coast mode.

For several years, Volkswagen has talked a big game regarding major plans to go green. The ID.3 is a significant breakthrough for the German automaker.

Volkswagen gains some 70,000 new customers with best-selling ID.3 in the first year by Volkswagen Press Release