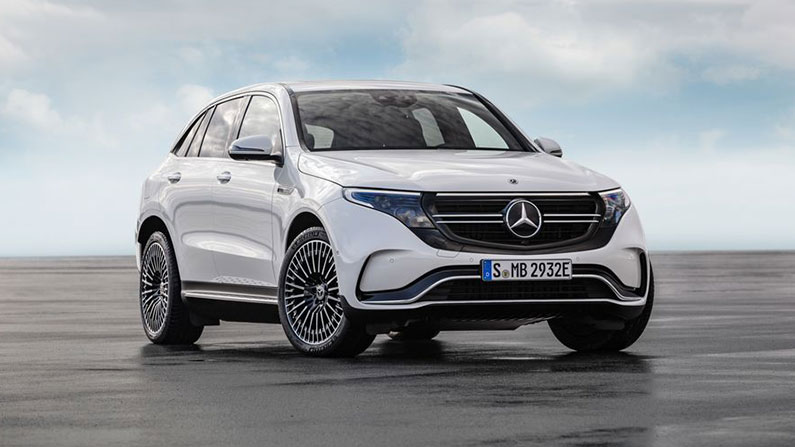 EPA Range: Up to 279 pure-electric miles 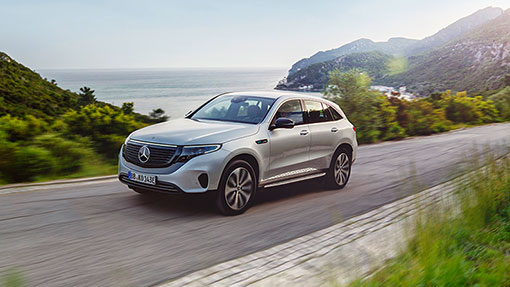 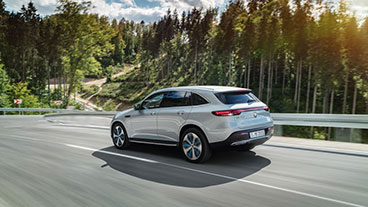 Mileage estimate: Up to 279 electric miles

Mercedes-Benz is clearly backing up its pledge to make a huge commitment to electric vehicles. The latest example is a premium EV crossover sport utility vehicle.

The electric 2020 Mercedes-Benz EQC has already been unveiled overseas and the U.S. release is reportedly the first quarter of 2020. Pricing is expected to be on par with two of its primary rivals, the Jaguar I-Pace and Audi e-tron.

Although not Mercedes’ first venture with an EV vehicle, some consider the EQC as a true effort by Mercedes to build an EV car from nearly the ground up. But the EQC shares some similarities to the Mercedes GLC, a gas-powered SUV. The EQC exterior is more muscular and slightly larger than the GLC. Yet the EQC shares the same wheelbase and many of the GLC design cues.

One expects interior room and comfort with a Mercedes and the EQC doesn’t disappoint. There’s plenty of leg and head room for all five passengers. The cargo area is a bit smaller than the GLC at 17.66 cubic feet and expands to 51.6 cubic feet with the second row folded down.

Not surprisingly, the EQC features an interior design that is worthy of the German automaker. It has a strip of ambient lighting that highlights the infotainment and screens, providing a somewhat futuristic touch. It has a 10.25-inch digital instrument cluster with a matching center touchscreen. What’s cool is the navigation system can create a route and let the driver know exactly how long one can drive before needing a charging station.

The new Mercedes SUV rollout coincides with the debut of the Mercedes-Benz User Experience (MBUX). This system employs an artificial intelligence-powered gesture recognition that not only discriminates between driver and passenger inputs, but can detect motion near the center screen, and utilizes it to bring up certain menus. The technology is triggered by the phrase “Hey, Mercedes” – allowing users to do things like search for vehicle features or settings.

Another cool feature is the companion app for smartphones allows one to remotely monitor the vehicle charging, giving people a chance to do something like have a cup of coffee or a meal while also watching the EQC charging progress.

What will grab the attention of EV lovers is the EQC range. Mercedes is estimating the mileage range at 279 miles, yet tested models reportedly got anywhere from 200 to 250 miles before a charge of the 80-kilowatt-hour lithium-ion battery pack was required. The EQC charges in approximately 11 hours using a Level 2 station. However, it can be charged from 10 percent to around 80 percent in a mere 40 minutes at a DC fast-charging station.

There are numerous reasons to grow enamored with the Mercedes EQC, and one of those is performance. Mercedes equipped the EQC with twin motors (over the front and rear axles) that combine to deliver 402 horsepower and 564 pound-feet of torque. Mercedes says the EQC will go 0-60 mph in 4.9 seconds and has a top speed of 112 mph. That makes the EQC quicker than the Audi E-tron, but it can’t keep up with the Jaguar I-Pace or the two Tesla SUVs (Model S, Model X).

One aspect to admire about the EQC is the diversity of its regenerative braking system, a technology that dramatically slows down the vehicle by simply taking one’s foot off the accelerator. What makes the EQC unique is its steering wheel paddles allow the driver to adjust the degree of braking in one of its five modes. In auto mode the EQC feels like its utilizing normal braking, while its most aggressive mode brings the SUV to nearly a complete stop. Obviously, the braking requires some practice.

There are also five driving modes with the EQC (Eco, Max Range, Sport, Individual, and Comfort). Yet none of them really make the Mercedes SUV feel very sporty. It’s not a vehicle to whip around corners or aggressively take on a challenging country road. What the EQC does deliver is the typical Mercedes focus on safety and a very quiet ride.

The classy, all-new SUV is one more example of Mercedes-Benz continuing to pursue its goal of transforming to electric vehicles. The EQC should be an appealing alternative to gas-powered SUVs. It will be interesting to see how it is received next year by American car buyers.

Mercedes-Benz EQC: What We Know So Far by Car and Driver