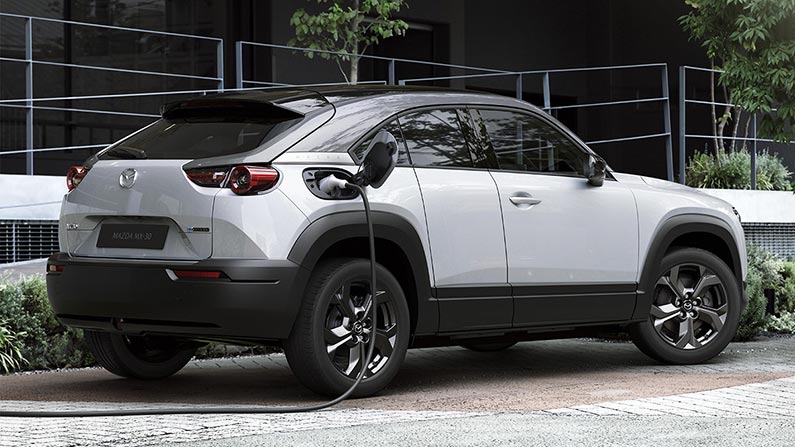 Mindfully Designed for Its Driver

EPA Range: Up to 100 pure-electric miles 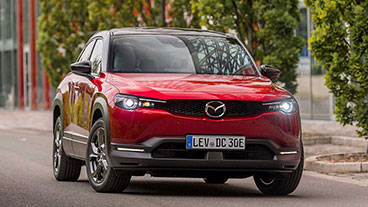 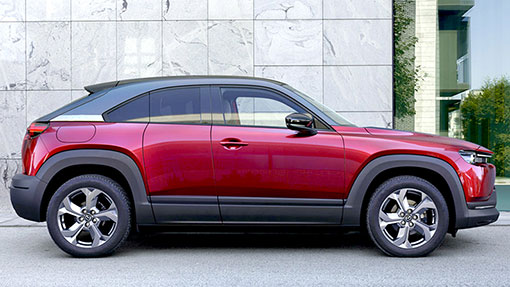 Mazda has never sold even one electric vehicle, yet finds itself mired in a controversy.

When the MX-30 comes out in early 2020, it will have a relatively small battery – a 35.5-kilowatt-hour pack. There are reasons for the small size, but the one media folks focused on was Mazda stating that it wants to keep the overall CO2 emission footprint as low as possible. Mazda says the MX-30’s CO2 emission will be similar to its diesel modes.

Mazda feels the MX-3’s battery pack will achieve the lowest possible carbon emissions in terms of life cycle. Even though a larger battery pack would increase range, it would also create substantially higher emissions, say Mazda officials. Those increased emissions would come both from higher electricity consumption and manufacturing.

The Hyundai Kona, a capable compact SUV, has a 258-mile range. Although not a small SUV, the Chevrolet Bolt goes 259 miles, the Kia Niro EV travels 239 miles per charge, and several other EVs crack the 200-mile mark as well.

“We are going against the trend,” Mazda’s global design chief, Ikuo Maeda, told Automotive News. “We didn’t want to make a totally different type of design just because it’s an EV. We wanted to keep proportions close to the existing lineup.”

Mazda reportedly will debut the MX-30 in Japan and also some European countries. The company believes the lack of range won’t be an issue because it will be appealing to young buyers who work in cities and whose commute distance is small, often times 25 miles or less each day. And when the MX-30 gets released in the U.S., it will likely be equipped with a larger battery, resulting in greater range.

The sporty Mazda MX-30 has a long hood, a small slit for a grille, and a sleek roofline. But its most distinctive exterior feature will be the rear half doors that open in the opposite direction and haven’t been around since the RX-8 sports car.

Mazda avoided making the MX-30 cockpit somewhat futuristic like Tesla has successfully done. But the EV definitely has a “green” feel to it. Some interior features are made with natural materials that were chosen because they don’t burden the environment. Mazda utilized cork and a fibrous door trim material made of plastic bottles because they are low impact and designed to be sustainable.

While the front seating is expected to be solid for driver and passenger, putting three people in the back will likely be a squeeze. And cargo space behind the second row appears limited. The MX-30 will most likely have Mazda’s latest infotainment system, and have Apple CarPlay and Android Auto connectivity.

The MX-30 employs a 105 kW electric motor that powers the front wheels and provides 143 horsepower and 195 pound-feet of torque. If one values performance, they won’t get it here. The MX-30 has been clocked going 0-60 mph in 9.0 seconds, which is slow by any standard.

So, the company is gambling that its 2020 Mazda MX-30 will still attract interest despite its modest 130-mile driving range per charge. That’s not very far considering many of its rivals go over 200 miles before requiring a charge. The details are still somewhat hazy, but the MX-30 will be capable of charging on standard AC power as well as more modern and faster DC charging systems.

Mazda is taking a gamble with low range for the 2020 Mazda MX-30. However, it could be a gamble that pays off due to its target market of young people with short work commutes.

Mazda MX-30 First Drive: A Car For Enthusiasts, Not EV Diehards by InsideEVs