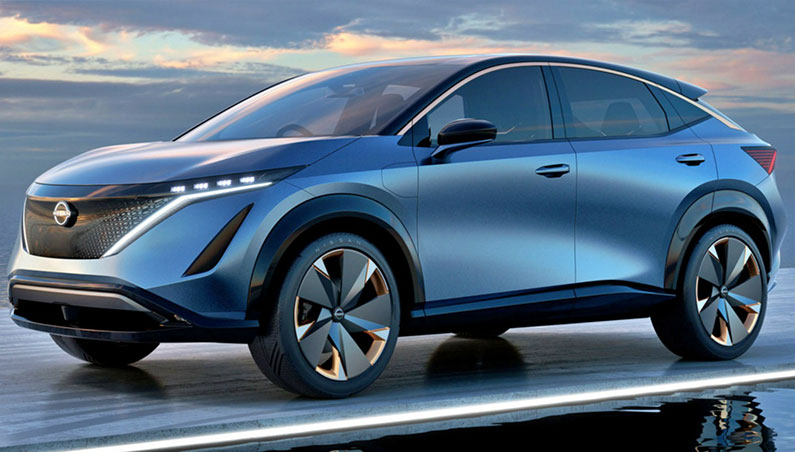 EPA Range: Up to 300 pure-electric miles 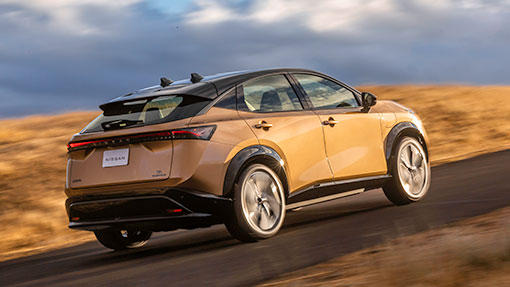 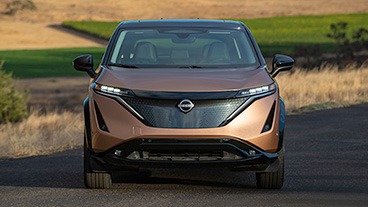 It took 11 years, but Nissan finally has a second electric vehicle to accompany the LEAF.

And from an initial glance, the new 2023 Nissan Ariya appears to be an improvement over the mildly successful LEAF, the first widely available and affordable EV.

Reportedly, the LEAF will disappear from the Nissan lineup by around 2025, replaced by a compact crossover SUV that shares a platform with the Ariya, but is priced more economically like the LEAF.

The introduction of the Ariya later this year is no doubt a sign from Nissan that it wants to be more impactful in the competitive EV world.

There are lots to like about the Ariya, starting with its appealing exterior. Yet it also has some innovations that Nissan never added to the LEAF.

Similar in size to the Nissan Rogue SUV, the Ariya exterior is along the lines of the angular Murano, another SUV. The Ariya has what Nissan calls a “V-Motion” front grille with a 3D pattern that displays the brand’s logo.

The rear is stylish as well, featuring a rakish C-pillar and a one-piece blade. There’s a choice of six two-tone paint colors and four full-body color combos, giving every Ariya a more individualistic appeal.

We applaud the Ariya interior that puts a premium on an uncluttered dashboard that is somewhat reminiscent of Tesla vehicles. The Ariya doesn’t have some of the typical buttons and the primary controls are operated via the touchscreen.

A cool center console can be adjusted to the driver’s preference and includes a dedicated spot to store a cell phone.

Another nice feature is the driver can pre-heat or pre-cool the interior while it’s parked and charging. There’s also a large box hidden under the center instrument panel and fold-out trays for laptops.

Seating is solid overall, including the back seat that can accommodate three passengers. Cargo space is roomy at 22.8 cubic feet behind the second row and expands to 59.7 cubes with the seats down.

The Ariya has a choice of two batteries – 63 kWh and 87 kWh – that are located beneath the floor. The smaller of the batteries comes standard with the base model, helping the single electric motor deliver 215 horsepower and 221 pound-feet of torque.

Depending on the model and if it has all-wheel drive, the Ariya will provide up to 300 miles of driving range. That easily surpasses the range of the LEAF (149 miles) and LEAF Plus (215).

The more performance-laden Ariya has the larger battery and uses two electric motors that generate 388 horsepower and 443 pound-feet of torque. Equipped with all-wheel drive, it will reportedly go 0-60 mph in 5.0 seconds, a much faster option than the standard model.

Regardless of which Ariya is chosen, each will have three driving modes that enable drivers to select the ideal setting based on weather and road conditions.

The Ariya will be a fun SUV to drive, thanks in part to its nearly equal front/rear weight distribution. It has excellent handling and is easy to maneuver in tight spaces.

The ProPilot Assist 2.0 system allows hands-off-the-wheel operation on highways. However, the driver must pay close attention in case they need to retake control of the vehicle.

The sporty-looking Ariya is equipped with voice personal assistance, hands-off driving and remote park, a technology that allows the driver to use their phone to park the vehicle automatically at a close location.

Looking to make an impact with its second EV, the company appears to have done that with the very appealing 2022 Nissan Ariya. There’s lots to like concerning the Ariya as it takes on some worthy competitors in the electric SUV class.