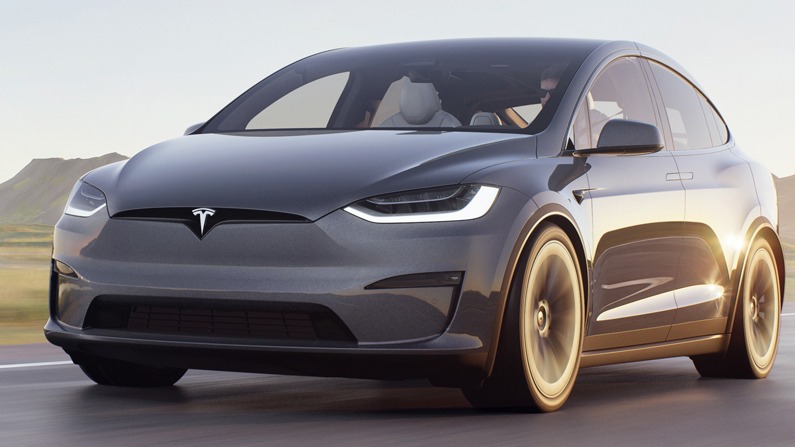 A Tesla Falcon with Wings

Charging Acceptance Rate: 11.5kW to 17.2kW, depending on battery size 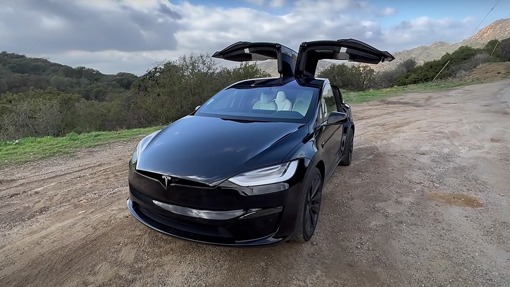 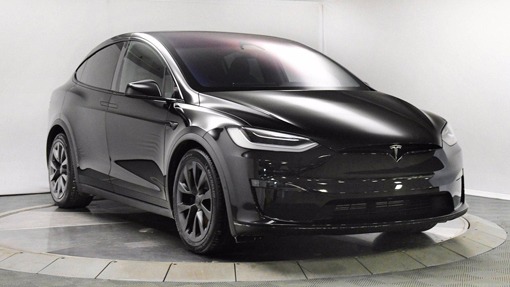 There’s nothing dull regarding the 2022 Tesla Model X. And frankly, would anyone expect something ordinary from Tesla motors and its iconoclastic owner, Elon Musk?

Now in its seventh year of production, the Model X is a battery-electric SUV with seating for five, six or seven-passenger configurations. There are many interesting aspects, starting with a huge panoramic windshield, the upward-opening falcon-wing doors, and of course the race-car like acceleration that enamors speed freaks. It has terrific range as well.

New this year is the Model X comes equipped with fully redesigned battery modules and packs, has faster charging capability, and has added a power-swiveling center touchscreen.

One of the aspects we love most about Tesla is the constant over-the-air updates that often add new features and system optimizations that weren’t part of the original vehicle purchase. It remains a rolling monument to technology.

Despite the issues, there’s no question the Tesla Model X personifies cool. The all-electric SUV separates itself from the crowd. It has a 100-kWh battery, two electric motors, all-wheel drive, and a single-speed transmission.

Those imperfections are easy to overlook when the focus switches to performance. The standard Model X is powered by two electric motors that generate 670 horsepower and accelerate quickly, going 0-60 mph in 3.8 seconds.

For speed enthusiasts who want even more, the performance-laden Model X Plaid has three electric motors, delivers a whopping 1,020 horsepower, and has been clocked going 0-60 mph in an outrageous 2.5 seconds. When fully equipped it’s capable of towing up to 5,000 pounds.

The Model X range is now 348 miles, increasing nearly 80 miles over the 2018 model. It has an 11.5-kW onboard charger, a standard 120-volt household adapter, and a 240-volt adapter. At a fast-charging station, it can be charged in less than 30 minutes. Charging at home is typically 8-15 hours using a standard 240V.

Driving the Model X is enjoyable. The ride is not perfect, yet the combination of speed and handling will thrill most Tesla owners. It provides a smooth ride and handles challenging roads with ease. And that’s impressive for an SUV that weighs approximately 5,400 pounds. The regenerative brakes give one a feeling of comfort being able to slow the vehicle down so quickly.

However, what’s not so great for many is the odd steering yoke, a rectangular wheel that’s reminiscent of something found in a jet or a race car. Some drivers have found it very frustrating and awkward to use. Despite 20-inch wheels and suggested high tire pressure (45 psi), the Model X absorbs bumps well. The autopilot mode remains controversial.

One feature most drivers are enamored with is the real-time digital map that monitors all cars and motorcycles in the vicinity. Another helpful safety aid is being able to pull up the rearview camera at any time. Standard driving safety features are forward collision warning, collision mitigation braking, lane-keeping system, and adaptive cruise control.

The interior is dominated by an enormous 17-inch infotainment screen with sharp graphics. While difficult to master at first, controlling the touchscreen becomes more intuitive with time. Nearly all the secondary controls are done via the touchscreen, which can divert attention from driving responsibilities. Still no Apple CarPlay or Android Auto is annoying.

The Model X front seats are spacious and accommodating, but the second row could use a little more legroom. The optional third row is just for kids. With all three rows up the cargo area is small at 13 feet. When rear seats are folded down there’s plenty of room (92.3 cubes). It has the largest front trunk (frunk) in the segment at 7 cubic feet.

Like other Tesla vehicles, the Model X certainly has its list of impressive qualities. Yet not everything is right with this SUV that features a low roofline and appears somewhat hatchback-like. These unique doors are slow to open and prevent the SUV from having a roof rack or a roof-mounted cargo box. Low garage ceilings can also be a problem and best be careful opening the doors in tight parking situations.

The rear doors are cool-looking but could steer some Model X buyers away. So could the sticker price that starts at approximately $82,000 (minus a $7,500 federal rebate), more than double the price of the Tesla Model 3 sedan. The ceiling is high for a loaded Model X Extended range, roughly $138,000. The new all-electric Audi e-tron and Jaguar’s I-Pace SUVs are its only true rivals.

The standard trim model (now called the Standard range) has enormous horsepower and goes 0-60 mph in 4.7 seconds. Yet that is crawling along compared to the upper-level Model X (Extended Range), which has been clocked going 0-60 mph in 4.4 seconds, while the “Ludicrous mode” drops the 0-60 time further to a mind-bending 2.8 seconds. Note that Ludicrous mode costs an additional $20,000.

We’ve already mentioned the Model X features terrific acceleration. The 75-kWh battery delivers 518 horsepower and the 100-kWh battery generates 680 horsepower. It has three rows of seating and is capable of towing nearly 5,000 pounds.

Like all Tesla vehicles, the all-wheel-drive Model X has an impressive range. The Standard range model goes around 270 miles before a charge is required and the Extended range travels 295 miles. Charging times with a standard 240-volt outlet take approximately 10 hours and just over one hour at a Tesla Supercharging station.

There are many reasons to own a Tesla. One of them is certainly having the neighbors admiringly checking out your ride when it’s parked in the driveway. Tesla vehicles are not only technological wonders, they are also sharp-looking cars that are wickedly fast. And the combination of looks and speed are a very good one-two punch for any competitor. The 2022 Tesla X remains a technological marvel and is extremely fun to drive. Even though it now has some competition in the BMW iX and Rivian R1S, it remains at the top of its class. 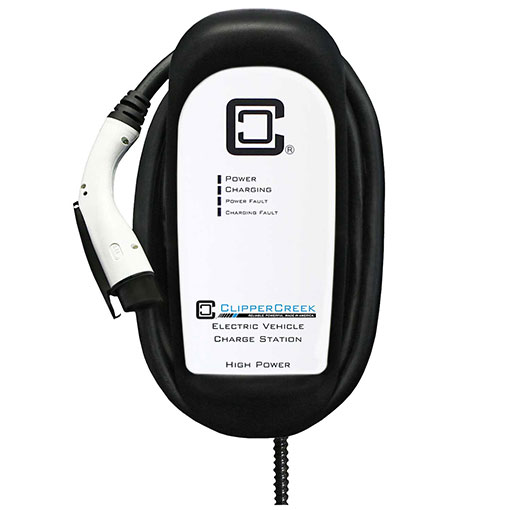 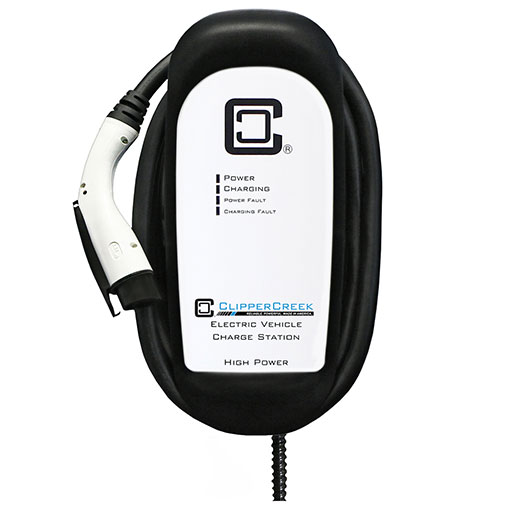 ClipperCreek offers a variety of EV charging stations, including both hardwired and charging stations with NEMA plugs. Visit our page EV Charging Stations: Should You Buy a Hardwired or Plug-In? to learn more about which type of charger would best suit your vehicle needs.

To learn more about the different types of plugs that come on a charging station, please visit our page about EV Charging Station Plug Types. 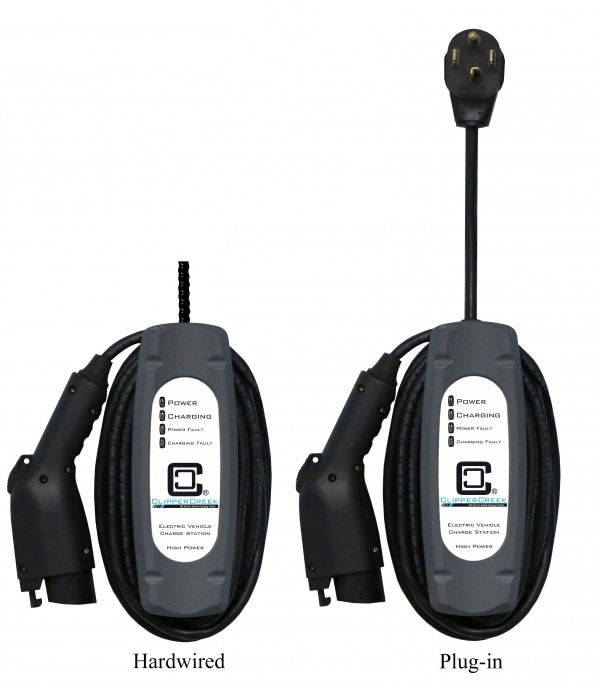 Installation was fairly simple. We purchased the 6-50 plug model, and our only complaint is that the power cord is extremely short (about 2” shorter than our previous car charging station) so we had to move the outlet to a location very close to the charging station. The ClipperCreek has a faster charging capacity than our previous GE WattStation. We checked today and it was charging our Tesla Model X at 22 miles per hour at 40 amps. We also like the longer charging cable. All in all, a good purchase.

Great units, this is my third (for different residences). Highly recommended and works great with my Tesla with an adapter (which allows me to share the unit with my daughters Ford).

Hi CC, Thanks for making a great charger! I love it! 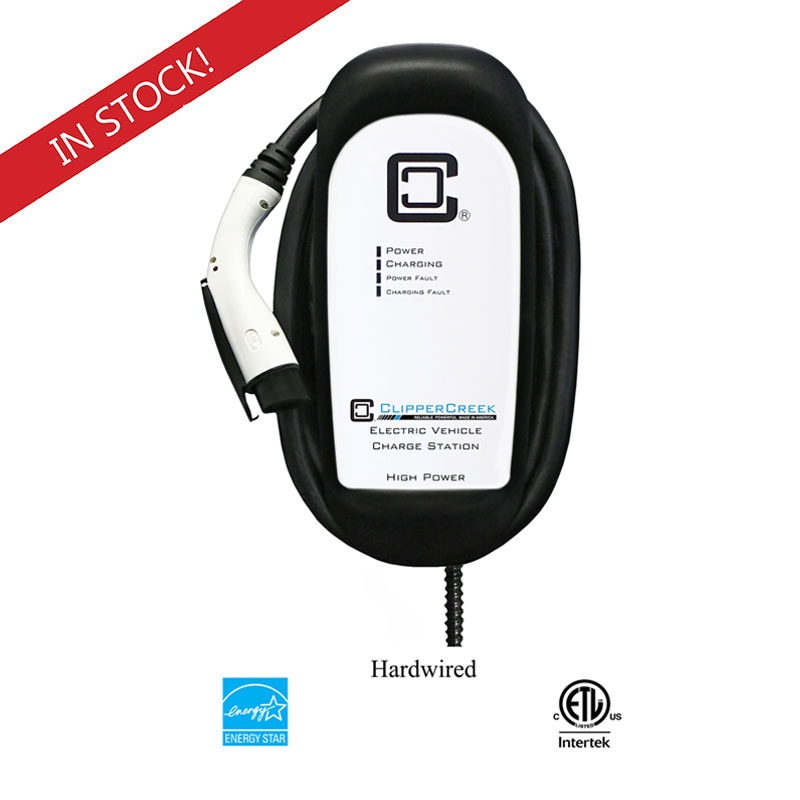